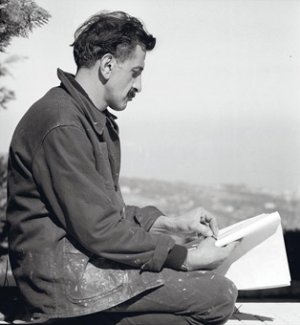 Claude Lemand. "Born in 1926 in Lebanon, Shafic Abboud is one of the fore­most Arab artists of the 20th cen­tury. His paint­ings are a man­i­festo for freedom, colour, light and joy, as well as being a per­ma­nent bridge between the art scenes of France and Lebanon and that of Europe and the Middle East. Both Lebanese and Parisian, he was very attached to Lebanon, to its land­scapes, its light and his own child­hood mem­o­ries. He was from a Lebanese Arab Modern cul­ture. The sto­ries of his grand­mother, who was the vil­lage’s story-teller, left an indelible mark on him, at a very early age. He was familiar with the paint­ings of the trav­el­ling story-tellers. The artist’s eye was also strongly influ­enced by Byzantine icons and tra­di­tions from his church. The writ­ings, debates, ideals, hopes and bat­tles char­ac­ter­ising the Arab Nahda, a mod­ernist and anti-cler­ical Renaissance which was ini­tially driven by Arab and Lebanese writers, were to later have a sig­nif­i­cant impact on Abboud’s intel­lec­tual edu­ca­tion.

Shafic Abboud arrived in 1947 in Paris. He blended in per­fectly with the city’s artistic life, just as many other artists who had come from all over the world after the Second World War (from North and South America, Europe, Asia and North Africa). This was the second major move­ment of migra­tion to Paris. France’s cap­ital was still at the time the City of lights and the favourite des­ti­na­tion of upcoming artists seeking for moder­nity, embodied by Claude Monet’s last painting period and by all the Parisian mas­ters of the 20th cen­tury. He had a par­tic­ular pref­er­ence for works by Pierre Bonnard, Roger Bissière and Nicolas de Staël. Abboud’s painting grad­u­ally moved from the poetic Lebanese fig­u­ra­tion towards the lyrical Parisian abstrac­tion, fol­lowed by a move from abstrac­tion towards a very subtle and sub­lime per­sonal “ab­boudian trans­fig­u­ra­tion”, which was simul­ta­ne­ously tra­di­tional and modern, pagan and sacred.

His work is often an invi­ta­tion to the joy of life, a pagan hedo­nism yet lim­ited by our frail human con­di­tion. However, this does not pre­vent a tragic ele­ment from being pre­sent in some of his paint­ings. These occa­sion­ally evoke, in an obvious or subtle way, dif­fi­cult sit­u­a­tions from stages of his life or that of his friends’, the tragic events hap­pening in Lebanon, in the Arab world and in var­ious parts of the World. Although Abboud never overtly put for­ward his engage­ments, his oeuvre and his inter­views with the Arab press reveal his opinion as well as his polit­ical and social con­cerns.

When I described his mature work as being ‘trans­fig­u­ra­tive’ ear­lier on, it seems to me that this word reflects best Abboud’s search for a syn­thesis between his fairy-tale like child­hood world and his tech­nical mas­tering of abstract Parisian painting. He sought to tran­scend the latter, stim­u­lated by both Bonnard and de Staël, by giving it a soul of its own and a rich and lumi­nous tex­ture. Through his paint­ings, Abboud aimed to share his own view on both his inside and out­side worlds. He trans­fig­ured images fil­tered from his memory into painting, such as his series of Destroyed Cafés of 1990. These large colourful com­po­si­tions beam the tragic reality of the war in Lebanon dev­as­tating the cafés by the sea in Beirut, which Abboud loved going to on his own or with his friends, when he used to visit every winter until 1975. In a sim­ilar way, he also trans­fig­ured his memory of his friend Simone after her death, whose dresses fas­ci­nated Abboud with their var­ious shim­mering fab­rics. Being nei­ther a devout fol­lower nor believer of any reli­gion, Abboud was nonethe­less very much influ­enced by the glory of the Byzantine Greco-Arab liturgy. Symbolically, Art tri­umphs over death.

Please allow me to remind you the impor­tance of this artist. Not only the French but also the Lebanese and Arab critics acknowl­edged the quality of Abboud’s painting at a very early stage in his life. Furthermore, he was the first and only artist from the Arab World to par­tic­i­pate to the first Biennale of Paris in 1959. In Lebanon, during two decades 1950-1970, he played a major role for Beirut’s cul­tural and artistic life. Beirut was the beam of all the Near-Eastern coun­tries, and had expe­ri­enced many fruitful hours of freedom, cre­ativity, pros­perity and a par­tic­ular way of life, which con­tributed to its inter­na­tional rep­u­ta­tion. Up to 1975, Abboud was used to spending the three winter months in Lebanon. He taught at the Lebanese University and organ­ised per­sonal exhi­bi­tions in one of the best gal­leries of the cap­ital. Abboud’s works were exhib­ited alongside the biggest names of the Parisian art scene up to 1968, and he par­tic­i­pated to the FIAC in Paris, from 1983 onwards. In 1994, after 15 years of war, the show of his oeuvre in Beirut was a huge media and com­mer­cial suc­cess. When Abboud passed away in April 2004, a moving farewell cer­e­mony was organ­ised at the Parc Montsouris in Paris’ 14th dis­trict, very close to where the artist had his small studio. Abboud then received a tri­umphant wel­come, when his body was trans­ferred to Beirut and to Mount Lebanon, where he was buried, as per his wish." (Claude Lemand, Shafic Abboud, Catalogue of the ret­ro­spec­tive at IMA, Paris, 2011).

His works (paint­ings and works on paper, ceramics and sculp­ture pro­jects, car­pets and tapestries, lithographs and artist’s books) fea­ture in many public col­lec­tions in