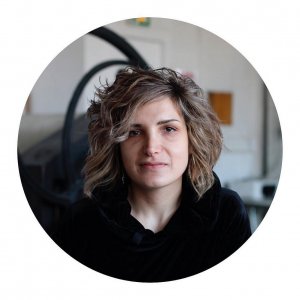 Randa Maddah was born in 1983, Majdal Shams, occu­pied Syrian Golan. After fin­ishing courses in painting and sculp­ture at Adham Ismail Center, Damascus in 2003, she grad­u­ated from Damascus University, the fac­ulty of fine arts, depart­ment of sculp­ture, 2005. In 2007, Randa also took etching courses at the Academy of Arts and Design in Jerusalem. Randa is a founding member of Fateh Al-Mudarres Center for Arts and Culture, occu­pied Golan Heights.

Her prac­tice is often rooted in the notion of home­land, working closely around the sub­ject of Madjal Shams and the inex­tri­cable ties to war, home­land, bor­ders and exile. With formal training in sculp­ture and etching, Maddah’s work fre­quently takes the form of real­istic depic­tions of bodies and land­scapes, warped by weight of expe­ri­ence, the faces and forms of which are mir­rored in her pencil draw­ings. Maddah also works with video, med­i­tating on the expe­ri­ence of dual exile and attempts to sus­tain the pos­si­bility for return.

John Berger: ‘ There is a power in this work (Puppet Theater) such as I have seen in no other. It has claimed the ground on which it is standing. It has made the killing field between the aghast spec­ta­tors and the ago­nizing vic­tims sacred. It has changed the floor of a parking lot into some­thing landswept ’.

A woman metic­u­lously tidies up the room of a ruined house in the vil­lage of Ain Fit in the occu­pied Syrian Golan. This vil­lage was destroyed by the Israeli forces in 1967 as well as many other vil­lages. The inhab­i­tants were pre­vented to come back to their houses and flew over to Syria where they were parked into refugee camps, sep­a­rated from the rest of their fam­i­lies. Randa Maddah was born in one of the few remaining vil­lages, Majdal Shams which is located on the cease-fire line from where she can con­tem­plate the inac­ces­sible “other side”.

One fixed camera films the artist doing house­work in a ruined house and refur­bishing it with floating cur­tains, a table, a chair and a strange object which looks like a bomb. After she fin­ishes her work, the artist sits and con­tem­plates the horizon towards Syria where Syrian the refugees from Golan suffer the hard­ship of a ter­rible war.

The video con­nects the exiled from both sides of the border, through the empathic pro­cess of a mirror image where the everyday life resists oblivion. By cre­ating a famil­iarity in the midst of tragedy and destruc­tion, by main­taining the prop­erty of the uprooted, by ritu­al­izing their lost lives, it calls for their return. ___

Pauline de Laboulaye: " Shot from the rooftop of her house in Majdal Shams, through a com­plex con­struc­tion of moving mir­rors, this video con­nects both sides of the border which has cut through Syrian Golan heights since the 1967 Six-Day war. Located on the cease-fire line, res­i­dents of Majdal Shams are reminded of this tragic sep­a­ra­tion on a daily basis. During the war the majority of the local pop­u­la­tion were exiled to Syria.

Through the con­fig­u­ra­tion of the mir­rors, the Israeli and Syrian mil­i­tary infras­truc­tures which enforce the sep­a­ra­tion, are placed in the same line of sight, just as the pop­u­la­tion on both sides of the border are sub­ject to the same oppres­sion. They share an equal sense of lost iden­tity and erased memory. For the artist, the work rep­re­sents a frag­mented vision of her frag­mented self, set against a beau­tiful land­scape that she feels her own." ___

Randa Maddah: "Those in search of them­selves often cannot remember what was there before their coun­tries were destroyed. All that remains is brittle flakes of debris invading the lacunae of their memory. Their own fragility blocks their way, while amnesia lies in ambush, and along the road rise tomb­stones of memory. Still, the wounded con­scious­ness, as it makes its way from one land to another, keeps manoeu­vring to avoid pain as if it never existed.

How could I under­stand destruc­tion? Borders deformed the place from which I came, changed the map, erected walls around people’s daily lives and within their lan­guage, until they had nearly for­gotten it. The place that was destroyed is now devoid of human life, and now even its his­tory has begun to vanish. Ruins dom­i­nate the scene. History and geog­raphy have been dis­man­tled and reshaped by occu­piers’ hands.

The mate­rials used in this video are as fragile as they appear. Through it, I tried to repair the irreparable. So, I col­lected what was left behind by the people who once lived here, after the occu­pa­tion had seized their land and expelled them. Cement shards and old pho­tographs are all that’s left of this place that oblivion will engulf and efface. I clipped some ele­ments from those pho­tographs, hoping, even in despair, to find an alter­na­tive land, even if this attempt is doomed to oblivion, like the sto­ries, like all the erased vil­lages."