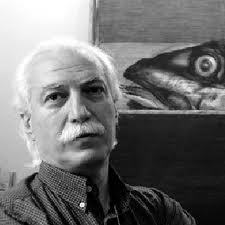 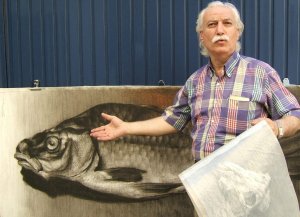 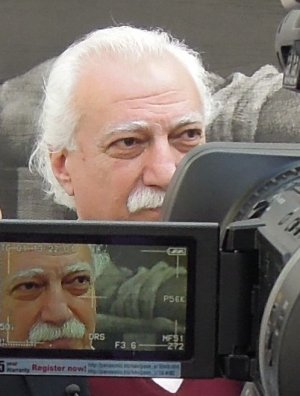 After 25 years of com­pelled exile and of being for­bidden to go back to Syria, it was finally pos­sible for him to go to Damascus in 2005 and to organise a large exhi­bi­tion there. Since 2010, his Syrian pass­port was con­fis­cated and he could nei­ther exit the country nor return to France where his wife and daughter live.

The works of Youssef Abdelke are in a large number of museums and insti­tu­tions, including The British Museum, the Museum of Kuwait, the Shoman Foundattion and the Institut du Monde Arabe. ___

Youssef Abdelke was arrested in Syria on the 18th of July 2013 by the régime forces, and lib­er­ated 5 weeks later on the 22nd of August. ___

A great observer of living phe­nomena, a metic­u­lous, dis­ci­plined and method­ical engraver, yet also a poet with images, Abdelke first depicted groups of humans wearing masks over their faces, actors looking for authors, just like Pirandello’s char­ac­ters. He placed them in the night, a ter­ribly dark night, where death and mon­sters were omnipresent. That was his ‘human comedy’, a tragic comedy from which the grotesque was never excluded. Humans pro­gres­sively dis­ap­peared whilst ani­mals and plants loomed from that same night. Their pres­ence is so sig­nif­i­cant that you can almost touch them or skim them with the eyes. There is no hyper-realism in all this, not even ‘realism’, in the tra­di­tional sense of that word: every­thing hap­pens as if he was re-inventing, with each line, nature, a sort of ency­clo­pedia of nat­ural phe­nomena which is done with care and at a slow pace.

His vision is so intense that you have the impres­sion of waking up from a dream when looking at his works. It is as if you had never really seen, in depth and in relief, what a simple fish is. Abdelke pen­e­trates the skull, or the fish, or a woman’s shoe, just like Michaux ‘entered’ in an apple. Maybe he had ripped apart the fish before recon­sti­tuting it. Hence he never ‘rep­re­sents’ the fish, the woman’s shoe or the ox’s skull : he res­sus­ci­tates them. This is his power to fas­ci­nate : every­thing is des­tined to die and to dis­ap­pear, yet every­thing can be saved, as if from a deluge. Each living phe­nomenon is a mate­rial mir­acle, a trea­sure and an enigma. Such a sur­prise it is when you redis­cover it ! I do not know how he man­ages in order to reach it. Observation and the utmost atten­tion are not enough. Everything hap­pens as if he wanted to re-invent the world, pro­tect it for good from offence, indif­fer­ence and omis­sion. It is as if he was him­self dead in front of the ox’s skull and that he wanted all living phe­nomena to replace him, the Syrian engraver. It is not ‘Abdelke’ who inter­ests him but rather every­thing that Abdelke isn’t, every­thing that will sur­vive to Abdelke and every­thing that goes beyond, far beyond, Abdelke.

I am sure that Baudelaire would have been impressed by his engrav­ings and that he would have ded­i­cated them poems and enthu­si­astic texts. There will always be day, night, and light, at least for another couple of bil­lion years or so, and there will always be dark­ness. It is in that light and in that dark­ness that Abdelke works, sim­ilar to a candle’s glimmer, a simple little candle, flick­ering in its candle-holder. When he reaches this result, which I call res­ur­rec­tion, he smiles, he is happy, he stops and puts down his chisel ; no point in adding any­thing. It lives or it doesn’t live. It emerges, it re-emerges or it does not emerge. The entire ques­tion of art lies there. Actually, the word ‘art’ is inad­e­quate. It is not a matter of art, but rather of a meta­mor­phosis of death into a live exis­tance. Abdelke’s fish is not a fish : it is an arrow, a beam, a breath, a whis­pered call to life. Yet it is also a fish – I don’t know maybe a salmon, a sar­dine or a pike. But it flies like a bird in the night in which we find our­selves once again immersed. In a large char­coal drawing on canvas, he drew the head of a fish in a box and that mas­sive head stares at us, as if the image of death was more alive for Abdelke than that of life. (Alain Jouffroy)

Based in Paris, the 57-year-old Syrian painter breaks with tra­di­tion through his unique approach to still life drawing. His intriguing works have turned heads the world over, selling in such inter­na­tional auc­tion houses as Christie’s and Sotheby’s. In addi­tion, his long-awaited exhi­bi­tion in Damascus in December 2007 gen­er­ated huge interest among art lovers.

Trivial items such as a nail, a fish or a shoe are the focal point of Abdelké’s works. “In order for a bone frag­ment, a dish or an empty sar­dine to do what a king and his horse or a woman and her pos­ses­sions usu­ally did, the artist is required to exert excep­tional efforts and to dis­play great skills,” art critic Emil Manaem writes in his intro­duc­tion to Abdelké’s book. “In his draw­ings, Abdelké allows simple things in life to impose their sovereignty over spaces, pushing them from the very begin­ning from the realm of realism to the realm of sym­bolism.”

According to Manaem, true artistic talent does not reveal itself in the way a fish is drawn or the manner in which its details are cap­tured, but in its power to make the fish an expres­sion or a symbol of life. “A fish embodies free move­ment and the vast sea. In the fish, there is both coher­ence with place and the impos­si­bility of living out­side it,” writes Manaem. “In its eter­nally wide-open eyes, there is a bla­tant chal­lenge and con­dem­na­tion of death.” When the fish is depicted sliced open or pierced by nails, the bru­tality of this image con­veys an under­lying mes­sage about the world.

Symbolism has always been inte­gral to Abdelké’s vision. His early ink draw­ings were full of sym­bols expressing clear-cut polit­ical mes­sages. The ‘People’ series from the 1980-90s expressed oppres­sion in the Arab world with its images of jails, guards, crowds of people and horses. “I revealed the dark­ness I felt inside in my ‘People’ series,” Abdelké said. “This helped me move on to more pos­i­tive and peaceful pro­jects.”

However, Abdelké’s harsh style and severity of sub­jects remained, even in his still life draw­ings in the form of skulls, bones and sharp knives. “Artists can’t change their skin even if they change their sub­ject matter,” Abdelké explained.

Abdelké’s con­cept of space has how­ever changed. “I’ve been inspired by the phi­los­ophy of people in South East Asia. They see man as a small part of the uni­verse; space in their paint­ings reflects the huge space we have in our uni­verse. Europeans on the other hand, see man as the centre of the world, that’s why you find their paint­ings full of people and ele­ments,” Abdelké said.

Abdelké now inte­grates both European and Eastern per­spec­tives into his paint­ings. “Eu­ro­peans devel­oped sci­en­tific rules for per­spec­tive so that things would look the same as in reality,” Abdelké said. “East­erners like the Arabs, Turks, and Chinese ignore per­spec­tive; they paint the most impor­tant ele­ments of their paint­ings in a bigger size regard­less of how they see look in reality.”

Finally, after more than 20 years of living and working in France, Abdelké is returning to Syria. “Un­like many of my friends, I never planned to settle down in Paris,” he said. “I’ve always wanted to come back to my home­land, Syria.”

This article was pub­lished in Syria Today magazine.