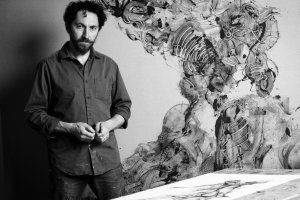 1. An Armenian born in Syria, Kevork Mourad draws highly from the dual influ­ences of his her­itage. A sense of his­tory is embedded in his line. Inspired by the cal­li­graphic con­cept of putting much thought into lim­ited line, Mourad’s works deal with a first layer of ges­ture laden with mean­ing—ref­er­encing Arabic cal­lig­raphy, Armenian motifs and minia­tures. The second layer is the sub­ject matter at hand, usu­ally ref­er­encing polit­ical and social issues of the pre­sent. The artist sees his work as a mirror in time: reflecting a ver­sion of the pre­sent, refracting images of the past, revealing to the observer what he or she seeks within it, in a dance of meaning that spi­rals through time.

2. Kevork Mourad was born in 1970 in Kamechli, a town in the upper reaches of Syria. Of Armenian origin, he received his MFA from the Yerevan Institute of Fine Arts in Armenia, and he now lives and works in New York. For the first time in Paris, the Claude Lemand Gallery will hold a solo show of his paint­ings in January-February and a group show in the Grand Palais, Art Paris Art Fair 2015. Mourad’s most recent exhibits were group shows at White Box Gallery in New York City and at the World Bank in Washington, DC. His dig­ital piece, The Map of Future Movements, toured as part of a group exhi­bi­tion in Jerusalem and Ramallah, and was in the 2010 Liverpool Biennial. He has had solo exhi­bi­tions at the Contemporary Art Platform in Kuwait, 2014, Gallery Z in Providence, RI and at JK Gallery in Los Angeles. He has exhib­ited at Rafia Gallery in Damascus, Syria. His solo exhi­bi­tion was also shown at the Courtyard Gallery in Dubai in 2010. Five of his pieces are in the per­ma­nent col­lec­tion on the 70th floor of the Bourj Khalife in Dubai. He also par­tic­i­pated in Art Moment 2014, in Budapest, Hungary, with an exhi­bi­tion and live painting.

The dynamic move­ment in Mourad’s com­po­si­tions reflects his strong interest in the rela­tion­ship between the visual arts and music. A sig­nif­i­cant part of his artistic prac­tice involves the tech­nique of spon­ta­neous painting, in which he cre­ates work during live per­for­mances with musi­cians. Mourad show­cases this engage­ment with musi­cality through his dancing fig­ures on canvas. With his tech­nique of spon­ta­neous painting, where he shares the stage with musi­cians - a col­lab­o­ra­tion in which art and music develop in coun­ter­point to each other - he has worked with many world class musi­cians. He is a member, as a visual artist, of Yo-Yo Ma’s Silk Road Ensemble. He has per­formed at the Brooklyn Museum of Art, the Chelsea Museum of Art, The Bronx Museum of Art, the Rhode Island School of Design, the Chess Festival of Mexico City, The Armenian Center for Contemporary Experimental Art in Yerevan, Le Festival du Monde Arabe in Montreal, the Stillwater Festival, the Nara Museum in Japan, the Art Institute of Chicago, the Rubin Museum of Art, Harvard University, Lincoln Center Atrium, the American Museum of Natural History, the Metropolitan Museum of Art, and Central Park’s Summerstage with the Silk Road Ensemble and Bobby McFerrin.

As a teaching artist with the Silk Road, he has worked with public school stu­dents throughout the five bor­oughs of New York, and has been called back many times as a favorite vis­iting artist. In 2010 and 2011, with actress/singer Anaïs Tekerian of Zulal, he co-pro­duced and cre­ated two multi-media plays, Tangled Yarn and Waterlogged, which premiered at the New York International Fringe Festival and toured San Francisco and the Berkshires. His most recent per­for­mance, Home Within, cre­ated with Kinan Azmeh, has been touring Europe and North America for the past year.

3. In Mourad’s work there is a sense of his­tory embedded in line. Inspired by the con­cept in Asian art of putting much thought into lim­ited line, Mourad’s works deal with a first layer of ges­tures that are laden with meaning. This first layer ref­er­ences Arabic cal­lig­raphy, Armenian motifs and minia­tures, the few ges­tures of his line sup­ported by a long his­tory. This first layer serves as a guide into the second layer, which is the sub­ject matter at hand, also very much influ­enced by the ancient his­tory of the artist’s her­itage. In con­fronting a work that is directly inspired by the ancient cul­tures that came before it, the observer can feel the long line of his­tory sup­porting the pre­sent, the tumul­tuous pre­sent taking inspi­ra­tion and hope from the past.