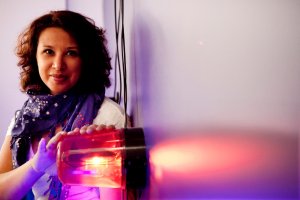 Zoulikha was born in 1977 (Moscow), lives and works in Paris (France) and Casablanca (Morocco).

Born in 1977 in Moscow, Zoulikha Bouabdellah grew up in Algiers and moved to France in 1993. A graduate of the Ecole Nationale Superieure d’Arts de Cergy-Pontoise in 2002, she now lives and works between Casablanca and Paris.

Zoulikha Bouabdellah’s works, in the form of installations, drawings, videos or photographs, deal with the effects of globalization and question their depictions with humour and subversion. In 2003, she directed the video Let’s Dance (Dansons) in which she confuses the archetypes of French and Algerian cultures by performing a belly dance to the tune of the Marseillaise.

The same year, her work featured in Experiments in the Arab Avant-garde at the French Cinémathèque (Paris). In 2005, she participated in the Africa Remix exhibition at the Centre Georges Pompidou (Paris), and in 2008 in the festival Paradise Now! Essential Avant-Garde French Cinema 1890-2008 at the Tate Modern (London).

Since 2007, Zoulikha Bouabdellah’s works focus on letters and words of love, focusing particularly on the status of women. Made with different materials - paper, acrylic, aluminum, neon, wood - her works act as slogans and forge links between North and South, joy and sorrow, pleasure and pain, the visible and unsaid.

Bouabdellah has participated in several biennials and festivals including the Venice Biennale, Biennale of African Photography in Bamako, Biennale of Thessaloniki, Turin Triennale and the Aichi Triennale.