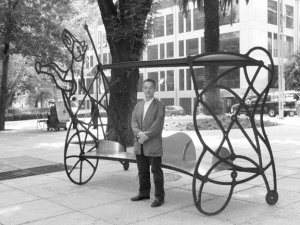 Born in Mexico the 8th of July 1952. Between 1970-75 studied Architecture at the UNAM. Obtained a degree in Architecture with a thesis about the urban cre­ation of pre­his­panic cities Teotihuacan, Tula and Tenochtitlán. From 1976 he estab­lishd res­i­dency in Paris, where he remainded for the next twenty two years, but kept strong ties with México. Currently he divides his time between France and Mexico.

In Paris, in 1982 he was one of the founding mem­bers of the group Magia-Imagen which later inte­grated with eight latino amer­ican artists (1980-90). The group had strong ties with the artist Roberto Matta. From 1973 he has had a great number of solo and group exhi­bi­tions in museums, gal­leries and insti­tu­tions in Mexico, France, USA, Spain, ...

He par­tic­i­pated in a pro­ject of mon­u­mental sculp­ture for the sculp­tural Garden in Xilao, Guanajuato. During his long artistic career he had received many impor­tant awards, in Mexico and in France.