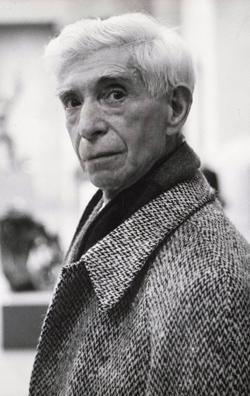 Larousse Encyclopedia. “Rus­sian sculptor, nat­u­ral­ized French (born in 1980, Vitebsk – died 1967 Neuilly-sur-Seine). He was first influ­enced by Cubism when he arrived in Paris (1909) but then grad­u­ally fol­lowed the baro­ques and expres­sionist ten­den­cies of his per­son­ality. Relief and hol­lows, curved and straight lines, light and shadow, build up his works according to inven­tive rythyms (Orpheus, 1931, Musee des Arques; The Destroyed City, 1947-53, Rotterdam). His Parisian studio rue d’Assas and his summer res­i­dence in Les Arques (Lot) today house the Zadkine museums.” Translated from French by Valérie Hess

Encyclopedia Universalis. “The oeuvre of Zadkine, French sculptor of Russian origin, is the most rep­re­sen­ta­tive of a sys­tem­atic adap­ta­tion in three-dimen­sion of the prin­ci­ples of pic­to­rial cubism, along the work of Laurens and Lipchitz. There is no need to seek inno­va­tions with a rev­o­lu­tionary impact in Zadkine’s oeuvre but it is full of all sorts of trea­sures. Moreover it ful­fills itself through an oddly ambi­tious chore with over­whelming verve, that of infusing the sculpted object with a poetic con­tent by reha­bil­i­tating the sub­ject and by priv­i­leging the main lyrical and epic themes of Man’s his­tory.

When Ossip Zadkine left Smolensk, his home town, to settle in England in 1906, it was to per­fect his edu­ca­tion in prin­ciple. However, the pressing voca­tion to become sculptor was quickly built on this brand new freedom. He was soon dis­ap­pointed by the con­ven­tional edu­ca­tion received in London and then in Paris, where he set­tled in 1909. There, Zadkine dis­cov­ered with a sim­ilar enthu­siasm Rodin, Roman and Gothic statues and African Art. Nothing could pre­pare him better to under­stand the research in plastic arts which was being under­taken at the time in the wake of pic­to­rial Cubism. Despite it being inter­rupted by the painful war years, his con­tri­bu­tion to this new aes­theti­cism can be seen as early as his first solo exhi­bi­tion, which took place in his own studio in 1920. The most per­cep­tive critics, that of Jean Cassou and Maurice Raynal, did not spare Zadkine of praises. This was the begin­ning of a suc­cess that would not weaken, fol­lowed by an impor­tant exhi­bi­tion at the Brussels Museum of Fine Arts in 1933; a ret­ro­spec­tive exhi­bi­tion at the National Museum of Modern Art of Paris in 1949; the grand prize of the Venice Biennial a year later; another ret­ro­spec­tive exhi­bi­tion at Knokke-le-Zoute in 1963. Whether it be at the academy of La Grande Chaumiere, where he taught from 1945 onwards, or in his Parisian studio, Zadkine con­tinued to have a strong impact on younger sculp­tors until he passed away in Paris. …” Translated from French by Valérie Hess

Claude Lemand. “Ossip Zadkine had become friends with the writer Claude Aveline, a member of the resis­tance and a child­hood friend of Jean Cassou. Inspired by Claude Aveline’s poem titled ‘Portrait of The-Non-Existent-Bird’, Zadkine drew a Portrait of the Bird (Claude Aveline’s Donation, MNAM Centre Georges Pompidou, Paris) as well as the 18 lithographs in the book pub­lished in Geneva in 1964. Zadkine also pro­duced a bust of Claude Aveline, his last sculp­ture before his death.” Translated from French by Valérie Hess