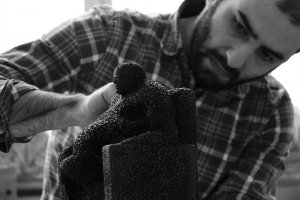 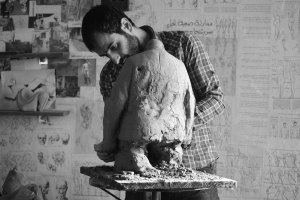 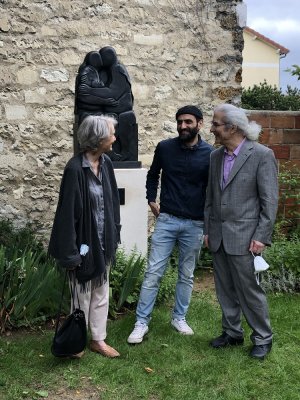 Khaled Dawwa is a Syrian artist and sculptor based in France since late 2014. He was born in 1985 in the city of Masyaf, west of Syria, and com­pleted his uni­ver­sity studies in Damascus where he grad­u­ated from the Faculty of Fine Arts, Sculpture Department in 2007. Since his early child­hood, Khaled has been inter­ested in the con­cepts of mass and dimen­sions, and has begun to exper­i­ment with the use of avail­able tools. This encour­aged him to com­plete his sec­ondary edu­ca­tion in the pro­fes­sional field, where he gained con­sid­er­able tech­nical exper­tise and sup­ported his studies at the Faculty of Fine Arts.

The core char­ac­ters to Khaled’s work began to crys­tal­lize with his grad­u­a­tion pro­ject from the Faculty of Fine Arts, which was titled “In Waiting” for the polit­ical and social sub­ject to dom­i­nate later. During his grad­u­a­tion pro­ject, which coin­cided with major polit­ical and social trans­for­ma­tions in Arab soci­eties, including Syria, Khaled’s obses­sion with the role and impact of art in people’s lives dom­i­nated his approach. Later, Khaled joined the “Al Bustan” cul­tural group in Damascus in early 2011, where he helped estab­lish and equip the centre. He con­tinued to work there until 2013. He then trav­elled to Lebanon where he spent a year hiding, working secretly and con­tin­uing his art through the cre­ation of the clay and knife Facebook page. Khaled cur­rently lives in Paris and con­tinues to work at his studio there. ___

The Stand up ! col­lec­tion came as a result of Khaled’s artistic res­i­dence in Saint-Quentin-la-Butire, in the south of France. The col­lec­tion was pre­sented at an exhi­bi­tion of the European Ceramic Arts Festival in July 2017 in the same city. The col­lec­tion con­sists of twelve pieces of coloured clay, which is treated with coloured wax. The work includes two basic ele­ments – the per­sonal and the chair. The sculp­ture sits in a manner sug­gesting that it is impos­sible to rise from the chair. The sculp­tures are adherent, fused, worn out in their chairs.

Stand Up! serie of bronze sculp­tures car­ries polit­ical and social dimen­sions. The title is open for inter­pre­ta­tion. In this work, Khaled attempts to expose the power of all kinds to those within every human being. It also crit­i­cizes the stale­mate in which everyone lives in the face of what sur­rounds him and the silence that turns him into a partner in the con­tin­u­a­tion of this reality. Work con­tinues on this col­lec­tion, through other vari­eties that include new ele­ments in addi­tion to the char­acter and chair.