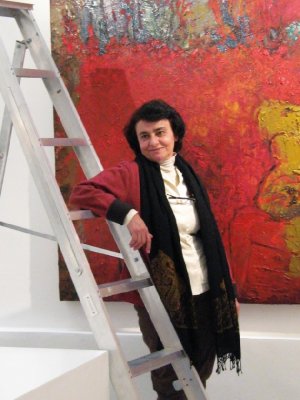 Born in 1953, Fatima El-Hajj first graduated in 1978 from the Institut des Beaux-Arts at the Lebanese University in Beirut, and later from the Academy of Fine Arts in Leningrad. She then completed her studies from the Ecole Nationale Supérieure des Arts Décoratifs of Paris in 1983. She was awarded with the Picasso Prize in Madrid in 1985, and has been teaching in Beirut at the Institut des Beaux-Arts ever since. She has been regularly exhibiting her works since 1986 in Lebanon as well as in other Arab countries where she is well-known, such as Kuwait, UAE, Syria, Bahrain, Morocco and Qatar, but also in Europe, such as in Spain and France.

Fatima El-Hajj’s landscapes are inspired by the gardens and parks of the many cities she enjoyed and observed whilst travelling across Lebanon, Yemen, Morocco and France. Her palette and her memory preserve the liveliness of the shapes, colours and light from these places and their inhabitants. More often, her paintings are a reflection of her own garden which she had laid out in front of her studio in Rmaileh, similar to how Claude Monet created his garden in Giverny and made it the main subject matter for his paintings during the last thirty years of his life. Yet Fatima El-Hajj’s garden is much more modest and different by nature than that of the Impressionist master.

She endlessly paints the countless facets of her interior garden filled with silence and beauty, a woman lost in her reading or contemplation, a couple enraptured by the music or small groups of people attending the village’s or city’s fairs. She likes to suggest that her paintings are an invitation for the viewer to seek for his own interior garden, a paradise which is within us and brings us serenity, beauty and enchantment.

Fatima El-Hajj does not conceal her admiration for the painters Edouard Vuillard, Henri Matisse, and especially Pierre Bonnard, as well as the Lebanese and Parisian artist Shafic Abboud, who had been her teacher and whom she admired and respected. Fatima El-Hajj is a follower of this school of painting and she is very grateful to all these great masters who helped her find her own path. ___

Thierry Savatier. In her painting, there is an absence of concession, a seek for an inner world, a harmony born from conflicting feelings between tranquility, rebellion, dream and doubt. She paints on canvas or on panel, using oil or acrylic paints and her works are often of a large size. As a colourist, she does not neglect the effects of texture. The movement, light and shapes suggested in her paintings, beautifully merge together, sometimes bringing the work on the verge of abstraction. (Blog of Thierry Savatier, Le Monde).