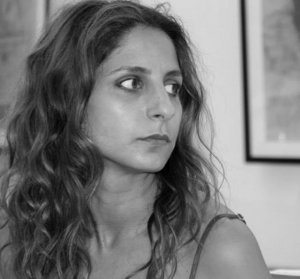 Bissane al Charif, a Syrian-Palestinian artist now based in Paris, oper­ates in the imme­diacy of life as a recent exile. Al Charif studied scenog­raphy in Nantes, France before returning to Syria to work. She accom­pa­nied her par­ents to Paris in December 2012 for a med­ical oper­a­tion. Afterwards, going back just didn’t seem like an option - life in Damascus was no longer live­able. Which isn’t to say that living else­where was easy. ___

This video was made as part of the art instal­la­tion I Once Entered a Garden (Asmahan’s famous song), by Bissane Al Charif & Chrystèle Khodr.

"You were born on water and in water you will perish". A pre­dic­tion made to a teenage girl who was born Amal (Hope) on the Mediterranean and died Asmahan in the Nile. Her story is the story of her time and her region, our region. It is through this his­tory that we try to re-appro­priate a body that we knew well, that of our ado­les­cence, the one that car­ried our loves. ___

The Guardian, 28.09.2015. ’ Bissane al Charif’s explo­ration of the mem­o­ries of Syrian refugees to high­light the human dimen­sion of the refugee crisis. “Leaving your life behind isn’t simple,” she says. “Drop­ping every­thing, accepting you have to start again some­place new. There are so many ques­tions.” An exhi­bi­tion at the British Council in 2015 show­cased the begin­ning of her mul­ti­media work Mémoires de Femmes.

While Al Charif’s depar­ture was alto­gether less trau­matic than that of so many Syrian refugees – she left by plane, when there still was an air­port – she felt that they would have held sim­ilar con­cerns. So she inter­viewed a diverse group of eight women who had fled, asking them the same ques­tions. What is the home you left like? How did you leave? What did you take with you? Where do you imagine your home will be in 10 years’ time?

Because Al Charif chose detail over drama, the doc­u­men­tary results are mes­merising in their mun­danity. The women describe beloved homes in such detail that you are right there with them; they relate arduous, extended jour­neys; and they list the random things they found in their hand­bags. One woman spoke of a tube of hand cream she received from her sister as a pre­sent. “I don’t use it any more,” she told Al Charif, “I just open it to smell it and remember her.” This res­onates with the artist. “I didn’t think I was leaving, so I only came with a small suit­case,” she says. “Still now, I miss my true belong­ings. I have very little from before. My mother came when I had my daughter, a few months ago, and brought me a few items of clothing, but I don’t have much.” Al Charif paired her audio record­ings of the women answering her ques­tions with images of non­de­script inte­riors or exte­rior shots filmed from car win­dows and the top floors of build­ings. She isn’t attempting a por­trait of Syria. She’s simply let­ting eight women speak. Their words are sub­ti­tled in French and English, but there’s no fur­ther expla­na­tion. “I just wanted to put these women there, one after the other. We all left. This is what we’ve lived through when we did.”

And that is pre­cisely what gives this work its edge. It anchors some­thing fleeting. As Al Charif points out, this depar­ture might be a huge moment, but starting over in a for­eign country and a lan­guage you don’t speak means that it is quickly for­gotten. Also, remem­bering is exhausting. Al Charif won­ders con­stantly if she shouldn’t make work about some­thing else. Or if she should have gone back to Syria and stayed. Or if she ever will go back. Maybe not. “I don’t know yet what I feel. I’m still in transit. I’ve not com­pletely accepted my depar­ture, but at the same time I know that I have left.” ___