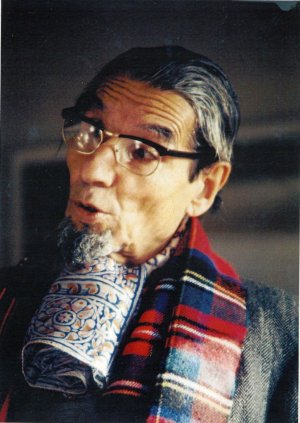 Benezit Dictionary of Artists. Abdelkader Guermaz grew up in the town of Oran and attended the Ecole des Beaux-Arts of this city from 1938 to 1940 and showed his works at the Galerie Colline throughout the ‘40s and the ‘50s. Until 1955, Guermaz worked in the fig­u­ra­tive style of the ‘Peintres de la Réalité Poétique’, a French art move­ment. His early works were land­scapes and still-lifes.

After 1955, he painted increas­ingly abstract works, and was drawn to the avant-garde of artists in Paris, where he moved in 1961. In the 1970s, Guermaz began painting works with mod­u­lated neu­tral fields, punc­tu­ated by touches of colour and subtle grid-like pat­terns, con­ceived as ‘abstract land­scapes’. Abdelkader Guermaz is con­sid­ered as one of the founders of modern art in Algeria.

Abstract shapes and sub­dued colour schemes dom­i­nate the can­vases of Abdelkader Guermaz, a major player in Algeria’s modern art move­ment. Guermaz, who grad­u­ated from l’Ecole des Beaux-arts of the city of Oran in 1940, emi­grated to Paris in 1961. The artist, who became asso­ci­ated with the School of Paris, befriended French artists such as Bissière, Manessier, Bazaine. Subtlety and min­i­malism char­ac­terise Guermaz’s artistic approach, giving form to his spir­i­tual med­i­ta­tions and inspiring French art critic Pierre Rey to call him the painter of silence and light.