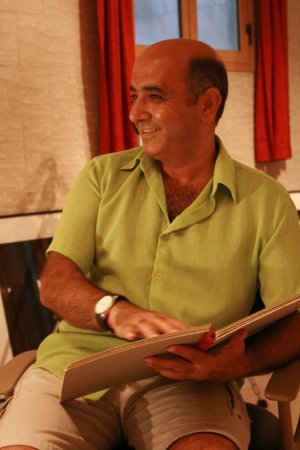 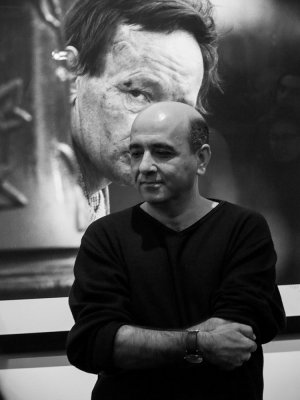 Nassouh Zaghlouleh was born in 1958 in Damascus. As a child, he loved peeking through key­holes. “That was my first camera” he smiles. Since then, he has explored Paris and Damascus and sought to por­tray the essence of each city in his own style. When Zaghlouleh started studying at the Higher National School of Decorative Arts in Paris in the early 1980s, he sought to break through the stereo­type of Parisian life, cap­turing beg­gars, addicts and dropouts on film. Every day for three years, he went to the same café and sat in the same corner taking pic­tures of the clien­tele. He saw the café as a stage that intro­duces for­eign viewers like him­self to the new cul­ture they have adopted.

“There was a man who came to the café every day to drink a beer,” Zaghlouleh said, pointing at the photo of a tall man with heavy fea­tures. “He sat on his own all evening talking to him­self and ges­turing into space.” Another photo showed a young girl passed out on the floor of the café. Next to the photo, Zaghlouleh wrote in French: “When alcohol isn’t a means of com­mu­ni­ca­tion or amuse­ment, it becomes a means of sui­cide.”

During his time in Paris, Zaghlouleh pho­tographed all the demon­stra­tions in the French cap­ital. He approached the man­i­fes­ta­tions head on and blended into the crowds, taking spon­ta­neous por­traits of the protestors. “I never ask per­mis­sion to take photos or ask anyone to pose,” he said. It kills the spon­taneity. So if I see a good photo I take it imme­di­ately, even if I have to run after­wards.”

Holding an album full of con­tact sheets, Zaghlouleh leafed through all the por­traits he took over the years. “I take photos till I cap­ture what’s inside. A por­trait doesn’t have to be beau­tiful. What mat­ters, is that it is gen­uine.” Like a diary, the album con­tains the black-and-white records of every day Zaghlouleh spent in Paris.

In 2003, Zaghlouleh started teaching black-and-white ana­logue pho­tog­raphy at the International Institute for Image and Sound in Paris. He says every pho­tog­ra­pher should work with ana­logue for a period. In his view, dig­ital pho­tog­raphy makes a pho­tog­ra­pher care­less because he can take as many photos as he wants and is bound to get one good one out of hun­dreds of images. With ana­logue film on the other hand, you have only a very lim­ited number of photos and you can’t see the result imme­di­ately. This forces the pho­tog­ra­pher to think about the image before pressing the button.

Though Zaghlouleh’s photos were always a cel­e­bra­tion of life, the summer of 2006 marked an impor­tant shift in his artistic career to still lifes and abstract photos. Worn out by the war in Lebanon and the heat of the Syrian summer, he started using his mobile phone as a camera. While walking to a friend’s house in the Old City, he took some 500 photos in just 20 min­utes, breaking the folk­loric stereo­type of Old City photos and focusing instead on the sharp con­trast between shade and light and the abstract shapes this cre­ates.

“When I was five years old, I used to go to Souq al-Hamidiyyeh with my aunts. I was fas­ci­nated by the patches of light fil­tering through the souq’s roof and the pat­tern it made on the pave­ment. But it wasn’t until I turned 50 that I had the courage to pho­tograph them.”

Although Zaghlouleh ded­i­cated his life to pho­tog­raphy, he for a long time refused to exhibit his work, believing that the right moment hadn’t come yet. Finally, in 2007, he organ­ised his first exhi­bi­tion From Paris to Damascus, in which he show­cased 30 photos of the two cities that have shaped his life. “It took me 25 years to col­lect the right photos of Paris. In Damascus it took just 20 min­utes to find what I was looking for.” (Nadia Muhanna (Syria Today, 01.08.2008)

Born in 1958, Nassouh Zaghlouleh is a pho­tog­ra­pher greatly influ­enced by the city of Damascus, a pre­em­i­nent sub­ject within his oeuvre. He often cap­tures the city’s fleeting moments and details, offering his viewer an inti­mate view of Damascus’ streets and, in turn, its his­tory. Zaghlouleh pre­sides as the Head of the Department of Visual Communication at the Arab League and has taught pho­tog­raphy at the International Institute for Sound and Vision in Paris and at the Damascus Faculty of Fine Arts. Actually, he is Professor of Photography and Video Art at the Arab International University of Syria. ___